A downloadable game for Windows, macOS, and Linux

Control the ninja robot 10C as you move around and swap places freely among a flurry of foes to defeat them. They can deal each other damage, you cannot deal damage to them. You must act fast and wisely: a high number of enemies means you need to react deftly, and defeating them all means you need to think ahead !

To stay within the theme, we worked mostly on having something challenging and fun that worked with the key feeling of mass you get from "X'em up" genres. Generally, the game tends to give some tools of mutual aggression to empower the player against his foes, sometimes going into power fantasy during late game (like Isaac or Nuclear Throne, etc).

We wanted to experiment something along the lines of "Dynasty Warriors but with Titan Souls powerlessness". To make the game still fun, we made our swap mechanic very unrestricted.

We hesitated to have the swap mechanic be gun-like, but we thought a mass of enemies (but with the ability to swap with any one of them no matter the walls) to be enough of a challenge.

We also saw the potential such a mechanic had for puzzle-like mechanics of course, but this is for eventual future version.

We used Lua and the Love2D framework to code this game; with help from bump, hump and peachy. All rights reserved to their appropriate owners. This was mostly done to learn Lua and experiment with a weird concept. You can find the code here.

Many thanks to Mark Brown for his wonderful work and everyone who put sweat into this event!

And finally, thank -you- for playing!

Simply download the .zip file that fits your system (32 or 64), unzip it and play!

You need to download Löve to run our gmtk.love file. You can do this here: https://love2d.org/ 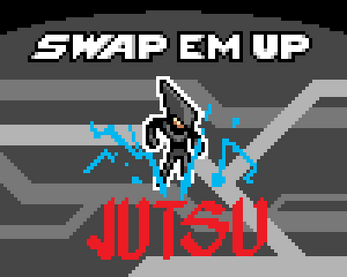